CIPR Artificial Intelligence (#AIinPR) panel kicks off – and we need your help!

The CIPR has launched a panel to explore the impact of artificial intelligence on public relations and the wider business community.

The panel is kicking-off a much-needed discussion around the use of new technologies with a view to explore the potential opportunities and threats of AI on the PR workforce and the future of the profession. As part of this, we will aim to define a capability framework for AI in PR, which will showcase the most anticipated changes in PR and how we can best prepare for them, offering greater clarity and certainty around this for professionals.

In a nutshell, the panel will aim to tackle three projects in 2018:

The panel has started its first project by inviting practitioners to submit examples of tools that characterise the impact of technology on public relations. Everyone who participates in the project will be cited in the results.

The panel is made up of the following people all of whom have expertise in this developing area. It will be chaired by Stephen Waddington Found.Chart.PR, Hon FCIPR.

The CIPR Artificial Intelligence panel will contribute and help lead the conversation around technology and public relations. It will publish guidance for practitioners from each of its projects during 2018.

The panel is a great step towards the right direction, with many opportunities for anyone who would like to get involved.

If you are a PR practitioner and you are using any ‘smart’ tools that make your life easier, feel free to add your recommendations to our crowdsourcing project or use #AIinPR hashtag on Twitter. More AI-focused content to follow soon!

One of the biggest European Wearable shows took place in London’s Olympia last week, on the 18-19 March. In this year’s expo, we saw a variety of companies tapping in the wearable market, from smart watches, fitness trackers, face-mounted computers, and smart jewellery. Differentiators depend on capability, design and of course, price. Taking a variety of forms, from clip-ons and wristbands to “smart” onesies, bras and socks, the list was endless.

The two-day conference saw speakers and vendors from around the world. It’s definitely an exciting time for wearables, and we were there getting our hands on as many smart devices as possible.

The different types of wearables covered fashion, sports and fitness, health and M2M, which more often than not crossed paths. There was also a developer hack fest and a business start up track, as well as live product demo and an exhibition, giving companies the chance to show off products to anyone attending the event. Finally, the event also hosted ‘The Wearables’, an awards ceremony recognising the UK’s leading large and small companies in the sector.

Plain and simple, bulky or sophisticated, one thing is for sure:  smartwatches have potential but their success will be directly proportional to how easy they will be to use and of course, whether they are serving a useful purpose. Additional elements would be being fashionable, comfortable and supporting a wide variety of apps. 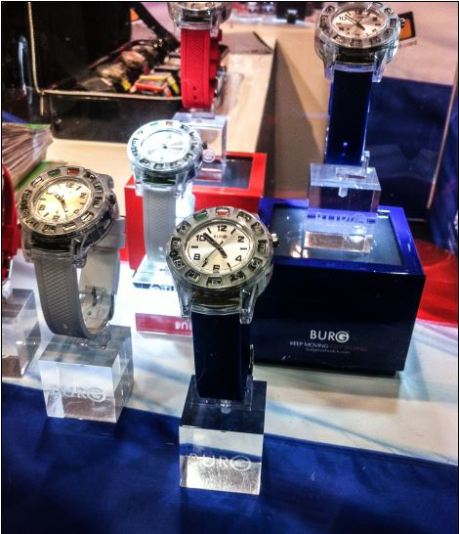 Among others, a screen-less, seemingly traditional watch that works with a SIM card and a handful of pressable keys and can both place and receive calls caught my eye. Ideal for a night out without having to worry for anyone nicking your £600 phone I’d say.

One of my favourite gadgets will have to be the gesture band concept which looks as if taken out of the movie “Click”. Working on simple pointing and waving gestures, with receivers hooked up to appliances around the home or office, its application can expand on pretty much any field but can be incredibly beneficial for healthcare purposes.

Smart clothing is a seemingly peculiar but promising area. With a lot of the items at the expo resembling super-hero costumes, the tight kind, it’s obvious that the focus is on tracking and feedback based on data from sensors close to the body. Tracking pretty much everything that uses current applied through the skin, you can keep track of your heart-rate, sleep, perspiration, skin temperature, stress levels, fat content, muscle strength and so on. The same goes for wristbands as well.

Health-related recommendations are taking a more practical approach. Smart clothes with inbuilt heating system to keep you warm when your temperature lowers; super-thin stainless steel fibres that feel like wool; smart bands that can be snapped around your wrist; UVA measuring wrist-bands that can measure light and UV exposure can support a variety of smart features. Trackers that can be attached on any piece of sport equipment like a snowboard can provide an accurate reading of measurements of each move of an athlete’s performance. 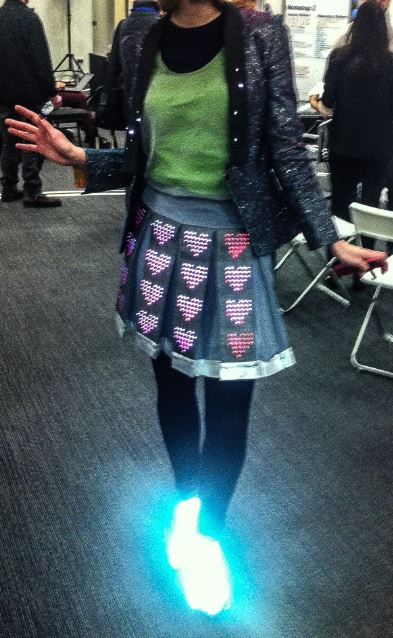 Fashion is gradually becoming more important in the world of wearable tech, as more gadgets take fashionability, wearablility and durability into consideration. But as the Expo proved, they can work the other way around too, with predominantly fashion items borrowing tech elements. Interactive NFC technology can be used to imbue jewellery and skirts with a personal emotive message, video or photos, while seemingly normal shoes can light up upon a camera flash.

Augmented reality goggles are definitely a strong player in wearables. From riding a roller-coaster to checking if a chest of drawers you want to order can fit in your apartment, the simple and cool 3D headset along with an augmented reality app held a special place in my heart. From gaming to interior design, whatever it may be that you want to experience, you can basically customise your own virtual reality by downloading the app, sliding your own smartphone across the front of the goggles and enjoy!

Another notable series of eyewear, brings sci-fi movies to mind due to its design and capabilities.  Aimed mostly at enterprise, it offers hands-free access to information; it’s built around an Android smartphone without the cellular connectivity, camera complete with zoom, responds to voice commands and allows headset to headset communication. Additionally, experimentation with lenses on the inside and the outside of the frame and tiny high-res screens that won’t draw unwanted attention are definitely a great platform for innovation in the field.

What can complement an augmented reality experience can also come from… the ears!  We tried on a smart headset with 3D audio, which was particularly fun when demoed as part of a live concert experience. 3D audio effectively means that you can hear sounds differently depending on how you’re positioned, thanks to location-aware technology. It would be interesting to see how this one evolves passed the obvious entertainment applications.

As an alternative to scanners and QR code reading apps, the concept of a piece of eyewear with an embedded QR code and barcode reader was also appealing.

Finally, nano-coating technology seems to be a definite emerging trend. With nanotechnology applied to the inside of devices that can protect electronics from failure due to full submersion in water and other corrosive liquids. This advancement can have many applications, including potentially a solution to the overheating and prolonging life span of computers.

The majority of the gadgets at the Expo are already available at the market or being released after May this year. Eventually, we’ll see a retail price tag on most of them. With more and more big and small companies involved, the pressure will be on releasing a competing product from every aspect.

However, the real challenge with wearables would be to show some real end-user benefit. While the focus is largely put on the technology, a lot of these devices are taking tracking and measurement a step further. It will be interesting to watch the developments on how the data will be gathered and interpreted to enhance customer experiences.

*As it appeared on http://www.techbm.co.uk/wearable-tech-show-2014-trends-to-watch/.

For more information on the Wearable Technology show you can visit http://www.wearabletechnologyshow.net/.